From London to Tokyo...Keith Reilly Takes on a New Journey（1）

fabric is a London club found in the heart of the city. Not only Londoners but people from around the world come to this place, craving its cutting edge sound and space. Although the club has become quite notorious for never expanding from its London location, this seems to be changing now. fabric founder Keith Reilly speaks to us about his next vision and the club’s first overseas office in Tokyo.

The most influential club in the world

Right next to Smithfield Meat Market in East London, there is a place always filled with loads of young people whenever its doors are open. While London pubs and bars close their doors before midnight, this legendary London club has become a ‘shelter’ for music enthusiasts and those who get kicked out halfway through a drinking session. The club literally brings a feast to Smithfield on Friday and Saturday nights.

fabric opened in 1999. The club has been acknowledged as London’s premier venue for the best music, best sound system, and best crowd. Few clubs in the world can beat the sound of fabric which ranges from house to techno, jungle, 2-step, dubstep, and any unique dance music that originated in the UK.

“In London, we have so many different movements and scenes: dubstep, deep and dark minimal house. We’re still very much in love with techno, hip-hop, underground, everything. Our job at fabric is to be open, to embrace, to nurture and to provide a stage for all of these things,” says fabric founder Keith Reilly.

For more than 30 years, he has dedicated his life to discover and provide stage for new sound and has been the key player in London and the world club culture scene. 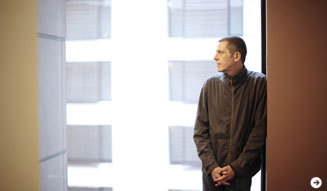 “During the last 5 to 6 years, we’ve been progressing a lot of things with dubstep in particular. But now, the dubstep guys are going back and bringing house. Now we’re hearing a lot of house music. So the whole thing is a very fluid, very organic, growing thing.

“For a lot of the things that we do, we’ve taken and learned from Japan.”

Supporting the scene -- Reilly looks after the London club scene with sharp yet gentle eyes. And what underlines his philosophy comes all the way from Japanese culture.

“Japan has been in my heart since I was 14. I was baptized by Mr Ryuichi Sakamoto. He brought a kind of new level of what we call blessing lightness to music, and it changed everything. I can’t even begin to stress how important he’s been to my life musically. What inspires me most is that Japanese eyes and mind see things and they learn to master supreme delicacy. In the West, a lot of the things we do are very heavy-handed and clumsy. When we see something from Japan, even something like a small business card, we just look at it for hours. Not just the design aspect, this also can be said about a lot of other things about Japanese culture. And for most of the things and a lot of the things that we do, we’ve just taken and learned from Japan.”

From London to Tokyo...Keith Reilly Takes on a New Journey（2）

Is there any plan for fabric Tokyo?

This is the first time that Reilly has set foot into the land of his dreams. He says he doesn’t even know whether he wants to go back to London. He’s known for being extremely loyal to the fans in that he’s never missed a single weekend at fabric. What could possibly change his mind and bring him to Japan?

“My journey into Japan is to learn how to speak naturally (laugh). The truth is…we have set up a new fabric office in Japan. This is the fabric’s first step into the world. I think we really need to and want to learn more about the Japanese mind before we start doing things. As it grows, becomes influenced and learns from other things outside of fabric, I press dearly that I want that to be an eastern Japanese influence. I hope that fabric learns to grow in a different way, learns to behave in a different way as a company and learns to see and understand things in a more Japanese way. My hope and dream are that our will will become purer and better because of these influences.”

A British lad drawn to Japanese culture has finally realized his adolescent dream. Now we can’t help but wonder if his plan includes fabric Tokyo. 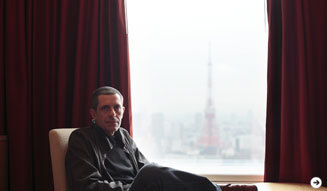 “We have no plans to open fabric Tokyo so far. I do have plans for a different project which is a big art project with DIESEL in November. But most importantly, we want to establish ourselves here first and take a very organic approach. For me, it’s about exchanging ideas. There may be many areas to introduce to Japan; from some events or performances to music, fashion or just ideas. But I want that to just happen naturally and organically. As I said earlier, for us, our purpose is to learn about Japan. The understanding and the whole archive of it will embellish everything that we’re doing. I may decide not to go home (laugh).”

No doubt Reilly is one of the most successful people in the world club scene. We can’t wait to find out what happens next when his creativity meets the Japanese creative scene.

KEITH REILLY
Keith Reilly has been around music and nightlife culture for over 30 years. He’s the founder of the legendary club the Cage that opened in 1979. Nearly 2,000 people went through the door of the club during its opening night without any ads in glossy magazines. fabric opened in October 1999 after nine years searching for the right space. fabric is opposite the historic Smithfield Meat Market in Farringdon, London. During this time it has become one of, if not the most influential nightclub in the world. Since 2001 fabric has also released the highly acclaimed monthly compilation albums that alternate each month between its key nights fabric live (Friday’s) and fabric (Saturday’s). Reilly is also one of OPENERS bloggers （http://k-reilly.blog.openers.jp/）