It is rare for a classic fashion house to launch new collections every season. However, BOGLIOLI has been continuously releasing new models for the last few years. In the early 1990s, the label, which had been operated as an orthodox jacket manufacturer up until then, first produced the unconventional cotton-made jacket with an innovative dying techniques called “tinto in capo”. This season, their line-ups have been even more enriched. The quintessence of BOGLIOLI is now to be unveiled.

Classical fashion houses tend to be obsessed with the three-dimensional structure of the shoulder and chest parts so as not to spoil the construction of jackets. They put great efforts into how to rigidly form a jacket by combining iron pressed fabrics, and the canvas and shoulder padding, whereas BOGLIOLI did not think twice about getting rid of padding , which later aroused a controversy in the industry.

The form constructed just with canvas embodies a tailored style yet is much lighter-weighted and truly comfortable to wear. Such relaxing formal clothes have never existed. No wonder first time buyers cannot resist investing in a second or even third jacket of the same model in different materials.

Here are BOGLIOLI’s seductive new collections of this season.

B4302G is a cotton-made jacket following the tradition of Coat that kicked off BOGLIOLI’s outstanding history since the 1990s. It is a short, tight double-breasted jacket with Military style domed metal buttons that features narrow lapels. The patched pockets make it look less dressier than conventional double-breasted jackets. The jacket, tailored without any fur canvas nor shoulder padding, is treated with the dying technique called “tinto in capo” and that gives it a distinctive feel.

In 2003, BOGLIOLI disproved an established theory in classical men’s styles by introducing this brave method which they work on wool-made K. Jacket and it is still on release. The patterns are laid out allowing for shrinkage after being washed-out. The puckering on stitches and the bleached surface add a worn-in texture. It goes through complicated processes such as constructing by only facings without padding nor fur canvas, and lining the sleeves to finalise after being washed out in order to make it comfortable to wear.

The key technique in tailoring a jacket using only a fur canvas without shoulder padding is called “senza spallina”. The WIGHT, which attributes what is called an unconstructed form based on it, depicts BOGLIOLI’s essence of classical style. It is a successive model of the Dover, released in 2008, and designed to be suitable for more elegant styling. Its materials vary and there is even something like a herringbone printed jersey. The stretching fabric provides you with ultimate comfort to wear.

This season’s new face, VINEGAR, which is designed in the same way as K. jacket, yet is made with only one piece of fabric that runs through the shoulder to the front body . The mixed fabric of wool and silk has been shrunken with “tinto in capo” and the surface of fabric has been treated with pilling. The edge of the lapels is double-stitched and the gorge is finished off with lapped seams. There is a difference in details such as a floating canvas sewn after being washed out, but what is remarkable is the easiness of throwing one piece of fabric on.

The double-breasted version of WIGHT, one of the Spring/Summer collection in 2010, is called WIGHT DOPPIO, released this autumn. It has the same design as B4302G, but is wool-made with a camel canvas, and its constructed shoulder makes it dressier. The black lacquer shank button is embossed with a crown. The non-washed rigid look creates an air of professionalism as well as elegance for business occasions.

UPPER is a four-button jacket with a ticket pocket, inspired by a field jacket.
It is also tailored without padding and has separate lining, and can be worn like a blouson jacket. This look characterised by peaked lapels that can be stood up and shallow V neckline is considered suitable for a casual occasion. It is fully lined in panels of wool, linen and silk fabrics.

The double breast knitted jacket M4 indicates BOGLIOLI’s new direction. In fact, they launched the collection of full items from the season before last and this outer garment marked the existence of a hybrid. Here the “tinto in capo” has been applied to coarse gauge knitwear and a coat of arms is engraved on the domed metal buttons. It has no cuff button nor lining of the sleeve and features blouson jacket-like pockets, and as such it can be worn like a cardigan.

There are various line-ups in the current collections including shirts, knitwear, or trousers amongst the above-mentioned Dover, which is going to be entirely changed next season. BOGLIOLI is no longer a classical brand having already been transformed into a Total Fashion brand. 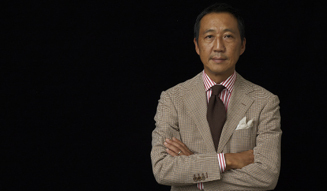 “BOGLIOLI’s styles are, of course, outstanding. Further more, it is an unrivalled achievement that they have never let “tinto in capo” spoil the quality of their products, although it was a very experimental dying technique to affect the texture of fabrics. Dignity, grace, and quality are the vital factors for classic clothes, and BOGLIOLI neglects none of them. BOGLIOLI’s well-balanced sense in leading the classic styles in the next generation has been thriving since they launched Total Collections. We United Arrows takes pride in our broad line-ups of BOGLIOLI shirts, knitwear, and trousers which we think are the best in Japan. You will see what BOGLIOLI’s essence is like through our full product range.” 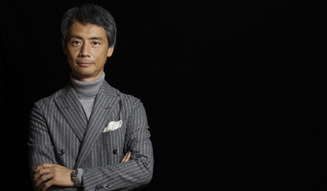 Tatsuya Nakamura is responsible for the clothing section for BEAMS, the Japanese leading fashion company. His unique yet apt selections from the Western classic menswear generates new trends every season, in both business and casual styles.

“About 15 years ago, a fur canvas was considered the best for a classical jacket, especially the one into which horsehair had been woven. At the time when constructed jackets were mainstream, BOGLIOLI daringly introduced unconstructed and lighter-weighted ones of the exquisite quality created by “tinto in capo”, which was totally cutting-edge, yet still kept the principle of classic wears. It is BOGLIOLI that has created the current trend in the formal clothing becoming more casual. Is it going to be ‘in or out’ of fashion? I reckon BOGLIOLI will have already foreseen what is going to happen next.”