BOGLIOLI’s Past, Present, and Future

The work of a sartoriale with his well established reputation was inherited by his son and grandsons, and the business expanded across the globe. Eventually, BOGLIOLI has become a prestigious fashion house with over a 100 year of experience. Looking back at its history, we therein explore the past, the present, and the future vision of BOGLIOLI.

The Boglioli blood has been running for 3 generations. The founder Mario Boglioli started his career as a sartoriale in the early 20th century. He had already become widely renowned for his excellent tailoring skills by the time of World War I. He would visit his clients and do the measurement for them, without having his own shop, which was the common way of doing business for tailors then.

Mario’s son Giuseppe followed in his father’s footsteps, but transformed their atelier into a factory, not just taking over the business as a sartoriale. He endeavoured to set up an unconventional sartoriale that would combine manufacturing with the bespoke tailoring service by inviting numbers of tailors and providing them with working spaces.

Thereafter, Giuseppe’s three sons took the helm of the factory as his successors and the business began further expansion. The factory had matured as a company. The former BOGLIOLI was called Lucas Moda and developed as a quintessential fashion merchandising and manufacturing company that produces high quality tailored jackets to this day.

They released a jacket called Coat in the 1990s, which went on to become an overnight sensation. It was a thin cotton-made jacket treated with the ground-breaking dying technique called “tinto in capo” to be made to look and feel as if it was somewhat worn-in. The youngest brother and the current designer Pier Luigi Boglioli, A.K.A. Gigi, looks back upon the creation of this classic as follow:-

“At that time, washed-out shirts, denims, and trousers were in fashion. So I just thought, why not jackets? However, it didn’t work to design orthodox constructed jackets to have a kind of texture peculiar to worn-in clothes and “senza spallina” (tailoring without shoulder padding) was the answer.” The Times Have Caught up with BOGLIOLI

BOGLIOLI established an unshakable position in the domestic industry after the release of Coat, and continued being on a roll. They bravely attempted to work on luxury cashmere jackets in the same way as they did on Coat, which is how one of their masterpieces K. jacket was born. This K. jacket marked BOGLIOLI’s international debut in 2003 by which time their reputation had reached Japan.

However, the essence of BOGLIOLI had not entirely spread to the Far East and Japanese people seemed to consider BOGLIOLI of a merely trendy classic label at the time. Most of the retailers preferred rather conservative, well-constructed Hampton to K. jacket at the beginning.

Even so, once people had learnt of the authenticity of their product, BOGLIOLI superseded all others. Its popularity skyrocketed when they introduced Dover in 2008. Then came the Wight fever in 2010. The following craze has been keeping BOGLIOLI a cut above the rest in the otherwise stagnating men’s fashion industry for the last few years.

They are increasing line-ups in addition to these popular models. Each boom was not just a one-off. It could be called a revolution. Many other labels have tried to follow their example to produce such jackets without canvas or shoulder padding. BOGLIOLI would never be satisfied with just mass-producing these bestsellers. Since 2008, the collection has been expanded to include shirts, knitwear, and trousers to match the jackets for total styling. They have even decided to discontinue the company mainstay Wight next season. BOGLIOLI has appointed Roberto Falchi, who previously worked for Christian Dior and Prada, as a member of the board and is already targeting new markets. They have extended the bespoke tailoring service to manufacturing and grown as a high-end fashion house. Still, they are ready to make a change for the better. BOGLIOLI is on-going.

The iconic BOGLIOLI company book represents that BOGLIOLI is not just a traditional sartoriale. Beautiful green is BOGLIOLI’s corporate colour. They own the most advanced factory and its display is full of artistic sense. It’s not only clothes but also benchmarks for men’s fashion of the time that BOGLIOLI creates. The up-coming interview with Pier Luigi on volume 4 is going to reveal further details. You will surely savour the BOGLIOLI world even more.

“Generally speaking, classical fashion houses are not so excellent at keeping up with new trends. In that sense, I would say BOGLIOLI has the edge. It evolves, sustains, and never sets a limit. Their attitude is far from typical Italian easy-goingness. Actually, the production of K. jacket with “tinto in capo” involves complicated processes like washing jackets while it’s still half done and then lining sleeves after they get dried for the finish. They bother to do that simply because it makes jackets comfortable to wear. They also dare to plan to drop Wight from the next season although it is the company mainstay at the moment. When ISETAN offered a collaboration, they were amused and happy to accept it. Surprisingly, they never have had limited editions with anyone before, but I suppose simply they never have needed to do so for its own striking line-ups. They are not stubborn craftsmen nor just canny manufacturers. Its willingness to adopt new ideas is one of the appeals of BOGLIOLI.” 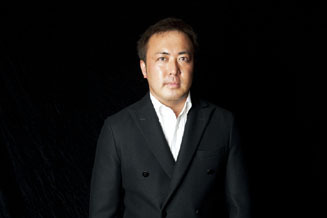 Ei Kanefuji has worked as a buyer for one of the most upmarket department stores in Japan, ISETAN, since 2002. He has a broad knowledge of the classic labels that occupy the 5th floor of ISETAN Men’s. His in-depth analysis of contemporary men’s fashion is based on his diverse experience of having been introducing new trends while meeting every customer’s need for a department store.